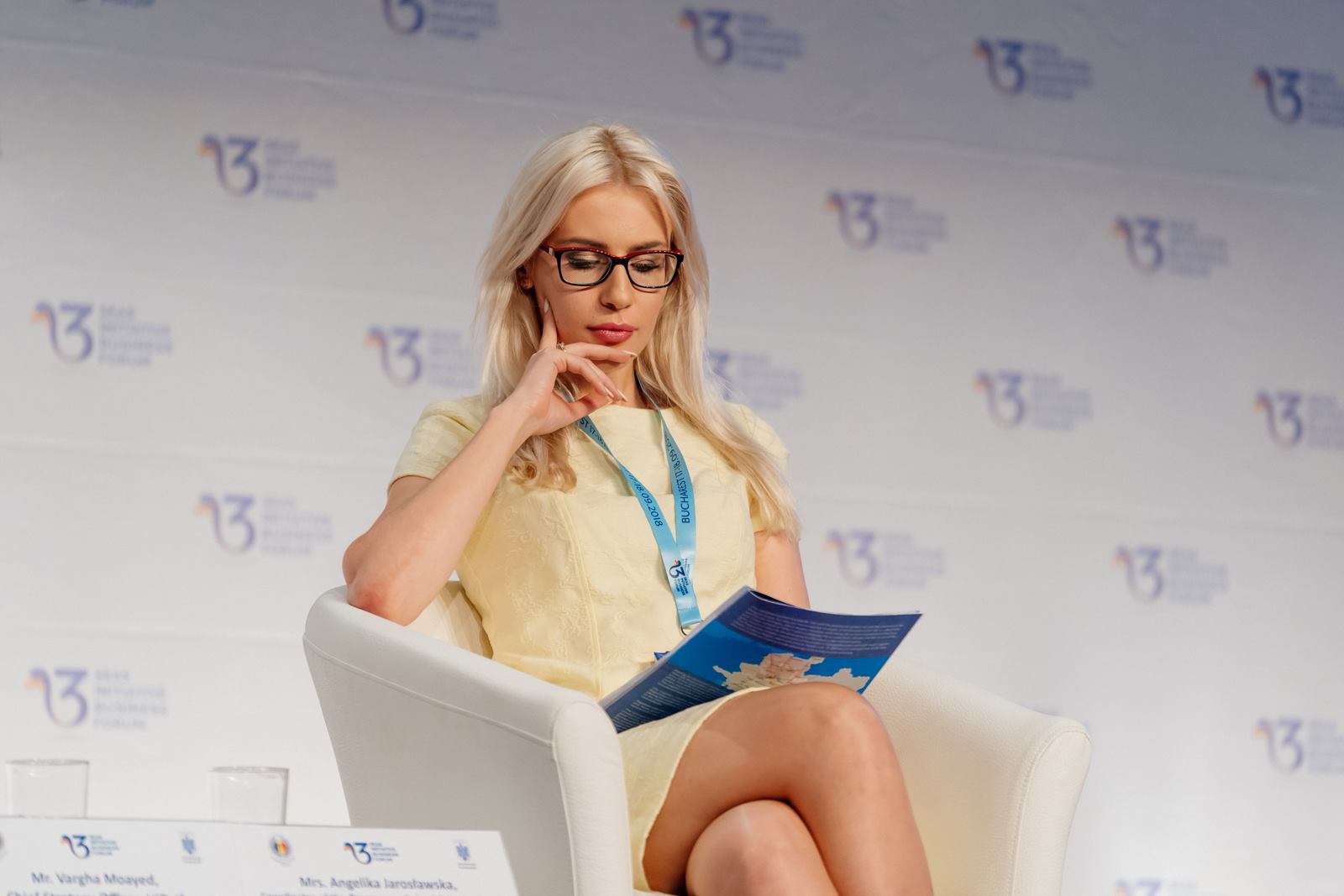 For several years, she had been warning about the impending war in Ukraine. Together with the Ukrainian organizations, the Institute of Cultural Affairs International, and the Geopolitical Alliance of Women, she appealed to the world about the ongoing war in Ukraine, which everyone called just the conflict. In Ukraine, civilians, especially children, were killed every day.

In Eastern Ukraine, firing lines run between houses and schools. Already a few years ago the situation was terrifying. But it was just a prelude to what is happening now… Everyone turned a blind eye to the ongoing escalation of military operations in the annexed cities in Ukraine. Russia, as it announced, did so. It attacked Ukraine and does not want to stop there.

Princess Angelika Jarosławska Sapieha, as a globally recognized anti-landmine advocate and a patron of several demining organizations, for many years appealed to the global community to support the demining process of the newly-planted landmines in Ukraine and stop Russia in planting the new one.For longstanding humanitarian activity and actions towards peace, HSH Princess Angelika Jarosławska Tarkowska Sapieha received the title of International Ambassador of Peace from the Soldiers of Peace – Peacekeepers from all over the world, during the press conference in Kyiv, Ukraine in 2019. Ukrainian citizens called Princess Angelika the Ukrainian Ambassador in the world and wanted her to live in Ukraine permanently.

Nike in mythology was depicted as a young woman with wings and an olive branch in her hand. For Ukrainians, she became the personification of NIKE already a few years ago. Fearless, fighting for the right purpose and for the most important, inalienable, and indivisible rights that we are entitled to and results from our human dignity. Fighting for the right purpose also means being persistent and unbending when it brings a price to pay. In the heart of Kharkiv in Ukraine, there is a monument “Flying Ukraine”.The basis of the image of “Flying Ukraine” was taken from the history of the ancient Greek goddess Nike – the goddess of victory.

Kharkiv is now under relentless bombardment from Russian forces. The bombs are falling on schools and hundreds of homes.Kharkiv, particularly, has suffered shelling and heavy fire in residential districts in recent days. The monument of Nike in Kharkiv was created to commemorate the proclamation of Independence of Ukraine.This unique monument for the city is located on one of the central squares of the city, in its historical center – Constitution Square, which originated with the founding of the city in the middle of the XVII century. Now Nike in Kharkiv is suffering, seeing people, children dying every day. Kharkiv is also one of the cities, which Princess Angelika Jarosławska Sapieha visited for humanitarian purposes, among others, for Atlantic Council meetings. Princess Angelika Jarosławska Tarkowska Sapieha, after consulting with Ukrainian humanitarian organizations, was the only one in 2019 who dared to go to the annexed Crimea and tell the Russian occupiers to leave Ukraine in peace. She showed the world in front of Putin that the sanctions imposed on Russia did not work to stop the war, that the world does not respect them properly, doing business “as usual”. Then, a deathly hush fell over the hall. Televisions that broadcast the speech of Princess Angelika Jarosławska Sapieha stopped broadcasting and there was silence on the forum. The organizers didn’t know what to do. The anger of Russian representatives in Crimea was great. They received information that a young woman had come to the Crimea to slap Putin. Everyone then warned the Princess to be careful. They warned that Putin has people around the world who will try to destroy the image of the Princess and discredit her actions. The Princess’ security people asked her to post the photo from Moscow on her social media because they feared that something bad can happen, due to her appeal. She had difficulties leaving Russia.

“The most effective way to destroy people is to deny and obliterate their own understanding of their history.”― George Orwell

The pro-Russian media produced fake news that Angelika Jarosławska Sapieha is a director at Gazprom. Then, she works for several Russian companies. This information was quickly duplicated by the same pro-Russian media operating in Poland, that harassed the former president of the Republic of Poland awarded with the Peace Nobel Prize, Lech Wałesa, the former Polish president and Solidarity trade union leader who played a leading
role in the fall of Communism. Everything that Angelika had agreed with the organizations in Ukraine, she fulfilled. Immediately after her return, together with Ukrainian organizations, she presented a joint position at an official press conference. She highlighted that the freedom of Ukraine in its sovereignty is also a matter of defending universal values, democratic principles, and European values as well. Everyone thanked her for her heroism. At that time, she also received the title of International Ambassador of Peace from United Nations peacekeepers. Together with women from Ukraine, Georgia, Syria, and Belarus she initiated a Geopolitical Alliance of Women to support international peace and human rights. They also prepared together with a joint statement: “Women. Peace. Strategic Partnership. Joint Activities” which appeal to the world to take action for our generation’s biggest challenges, which was given to the Secretary-General of United Nations. Everyone applauded standing up. In the meantime, in Poland, this act of courage against Russian aggression to Ukraine was used by just a few media, who spread propaganda. Quickly, they reposted the Russian information, that Princess is working for Gazprom or have personal contact with Putin, or that she is against Ukraine. Sounds absurd? Impossible to plant the seed of such nonsensical propaganda?

The more nonsensical the better for those who spread it. It’s paradoxically harder to dispel the lies when they are total, abstract, and designed in a way to stimulate the imagination. A lie can make it halfway around the world before the truth has time to put its boots on. At that time in Poland, nobody has written about Russian aggression in Ukraine for several years. It was not a “hot” topic.

Nobody wanted to hear about the war in Ukraine because it was simply not in the media and if anybody were active in that topic or supportive of Ukraine, they were quickly accused of being an agent of influence.It’s sad to admit it, but everyone has failed and the world was sleeping, when the freedom of Ukraine was taken every day a little bit more. Was the business with Russia, which led the Polish government, more valuable? Millions of tons of coal from the Russian-occupied Donbas went to Poland at that time. Factories were built in, among others Mercedes, which was officially opened even by Putin himselfIn Crimea, Germany also sold huge pumps for hydroelectric plants.  Svitlana Salamatova, initatior of Geopolitical Alliance of Women, who cooperate closely with Princess Angelika, for many years has informed the world that world leaders disregard what is happening in Ukraine, that they misjudge the situation in Ukraine when speaking of the conflict.

She openly said that it was not a conflict, but a real war in which people were dying. Princess Angelika Jarosławska Sapieha has actively participated in all meetings of the Three Seas Initiative. Each time informing how important it is to invite Ukraine to this initiative. She also presented her projects in the European Parliament and the European Commission, especially in the program dedicated to connecting Europe INEA, CEF. In these programs, Angelika strongly urged decision-makers not to omit Ukraine. She supports many initiatives, including the pioneering startup MIGAM, where she was a special advisor to the board, startup, which is a life-changing project for the entire community of deaf people. Migam startup has been awarded world awards, incl. by Richard Brandson, or Prince William and Princess Katherine, when they came to Poland on an official visit.

In 2015, she met with the families of people maimed as a result of armed operations in Ukraine, including children wounded by landmines. It was a terrible experience. In 2016, she was the initiator of a huge event in Ukraine at the Kyiv Innovation Market – UKRAINE 3.0, where participated over 1100 companies from Poland and Ukraine. The
highest authorities of Ukraine joined this five-day conference.Dozens of representatives and companies from Poland started cooperation with Ukraine. Right after graduating from high school named after The United Nations, Angelika Jarosławska Sapieha wanted to change the world for the better. She believed that each individual can make the world a better place. From childhood, her beloved person and role model was Princess Diana, whose kindness and love were stronger than hate and violence, which affected many innocent people around the globe. When she started studying, she wanted to direct the business to support the poorest. She graduated from two fields of study at the Royal Jagiellonian University in international economics as well as applied economics. Then the Warsaw School of Management, the University of Warsaw, where her master’s thesis described the detailed Poland 3.0 program and new Three Seas Initiative. Her master’s thesis opened a dialogue to connect the three seas Baltic-Adriatic-Black Sea. Her socio-economic program received high marks at IESE Business School, where Professor Antonio Subira invited her to lecture at IESE Business School.